The inspiration for the soap, name and artwork for the label comes from the legend that is the Cailleach or Cailleach Bheur the Celtic crone goddess. She is depicted differently from place to place, as the weather witch, 'Bheur', one of the additions to her name in Scotland means 'sharp' (in relation to cold).

Deep in Glen Lyon Perthshire, around a ninety minute drive from The Gentleman's Groom Room is the remote Gleann Cailliche (named after the Cailleach), here there lies a small turf-roofed shelter known as Tigh Nan Cailleach or Tigh Nam Bodach. According to folklore spanning several centuries, after the Cailleach and her family were offered shelter during a snowstorm, she was so grateful that she left their likeness in stone with a promise that, as long as they were well cared for, the glen would remain fertile, the winters would be mild and summers warm. To this day, it is said at Samhain, the Gaelic festival marking the end of the harvest season, the stone figures are returned to their quartz made shieling the basic turf-roofed shelter to spend the winter months undercover and they are brought back outside every year around Beltane in May.

Cailleach shaving soap has a light, warm, spring/summery scent of bitter orange, lemon, ginger and bergamot top notes. Middle notes of rhubarb, labdanum and coriander with a base of cedar, sandalwood and white musk. This is combined with a good 'hit' of menthol to represent the winter months. The 'Bheur' or sharpness of the menthol is great when the soap is face lathered to 'Build The Chill', the longer you lather the colder the 'hit', lovely when combined with a menthol based aftershave splash such as Proraso (green). 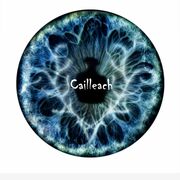